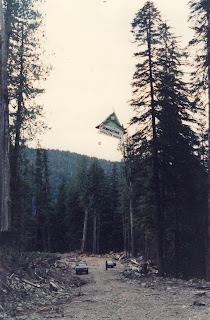 The infamous tree sit, where as the cops and loggers moved in to remove it with a crane, the sitter stripped naked and from his shit bucket scooped out hand fulls and covered himself in his own shit, taunting the cops to now come get him. As they lowered the platform down, he cut his safety line and holding one end jumped of the platform, 30' from the ground swung over the heads of the police and loggers crashed into the trees and took of running eluding pursuit and living to tell the tale. He was quoted as saying ' I used my own personal mountie deterrent'. This tactic caused a lot of debate, most of it negative, it was an extreme thing to do but I walked the clearcut that this platform tried to stop and in it we found a Cedar stump 20' in diameter, counting the rings we worked out it was close to 1200 years old! September 1991.
Posted by Welcome to the Walbran valley reunion blog at 9:06 PM