Which Forest a poem from Christine Lowther

By Christine Lowther:
Posted by Welcome to the Walbran valley reunion blog at 8:42 PM 1 comment: 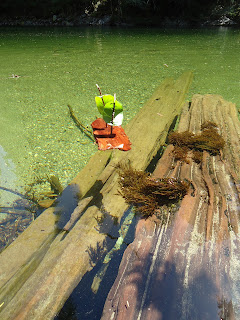 We lucked out with some beautiful weather for a trip to the valley, late April, 20 degrees and no bugs. There is a new clearcut as you drive to the bridge after turning off from Glad Lake main its all getting closer and closer to the Falls and the 'Bite'. We started putting together a proper outhouse and had some time to hike and swim. Made these little boats with some kids from the driftwood in the river, a flake of Cedar, some twigs and a Salal leaf as a sail. They worked really well and we had quite a few sailing at one point. What makes the water there so green!
Posted by Welcome to the Walbran valley reunion blog at 11:05 AM No comments: 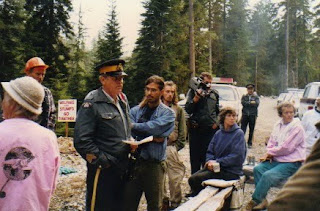 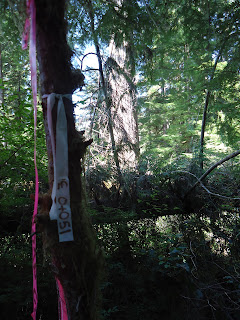 Take the 'bite' out of the Walbran.


The main consensus that came out of the 2011 reunion was that we have to become more involved in keeping an eye on the valley. That we could see that the logging companies are actively working right up to the park boundaries and that we need to be aware of their future logging plans. That we need to be proactive and work to strengthen the park boundaries and to have included into the park the 'bite' that removed from any protection the heart of the Walbran.The areas which include around the bridge where the road ends, Fletcher Falls and the start of the board walk trails to 'Castle Grove', 'Maxinines tree' and Anderson lake. And all that beautiful lowland old growth rainforest, part of the last 2% that is still unprotected.
B.C Parks also recognize the importance for these areas in their 2003 report 'Purpose Statement and Zoning Plan' it states that they should ' Work with MOF and Timberwest in Fletcher Falls and “bite” area to resolve management issues arising from blow down and access development in the area'. And that they should be aware of  'Potential adverse effects of logging adjacent to the park boundary especially in the vicinity of the“low-intensity area” in the mid-Walbran watershed'. Looks like there is also a fair bit of consensus between the Provincial Parks and the Walbran reunion.

Posted by Welcome to the Walbran valley reunion blog at 11:39 PM No comments:

Directions to the Walbran Valley

How to get to the Walbran Valley. be prepared this is a remote wilderness area, always drive with a usable spare tyre.

From Victoria. take Trans-Canada Highway past Duncan, past the Somenos Marsh Conservation Centre, past the BC Forest Museum. turning left going west to Cowichan Lake onto the Cowichan Valley Highway
*Drive 26 km to the town of Lake Cowichan, going left at the "Cowichan Lake" sign
* Set odometer to zero at Cowichan Lake. This is the last fuelling stop.
* Go straight through Cowichan Lake, past Mesachie Lake and Honeymoon Bay.
* At 13 km go left at the fork onto Walton Road and go past the Caycuse campsite
*At 31.9 km sign indicates Carmannah/Walbran Provincial Park to the right. BUT GO LEFT HERE, instead onto the Caycuse Mainline.
* At 40.2 km stay straight and stay off spur roads
*At 42 km go left at Blue spray-painted "W" at fork in road
* At 50 km stay left ( Do not cross bridge)
* At 55 km pass Mclure Lake
* At 58.9 km you reach the "Ballpark" and go left onto Walbran Main (Do not go up the hill to the right)
* At 62.4 km stay right ( Do not go up the hill)
* At 64.2 km reach Walbran 1100. Go STRAIGHT!
* At 71.1 km Turn right at pink ribbons down to Walbran Creek*
* At 74.4 km take another right at flagging
* At 76.1 km Arrive at the bridge over Walbran creek.

It is suggested that you read; The British Columbia Governments guide for safe travel on logging roads.

Posted by Welcome to the Walbran valley reunion blog at 11:37 PM No comments: