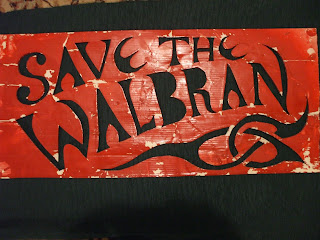 Posted by Welcome to the Walbran valley reunion blog at 4:59 PM No comments:

Traveling along these logging roads the bumpy rock surface and the dust can make the journey almost intolerable. Outside the cramped van through the smudged windows the sight of the huge clear cuts of industrial forestry would hold my gaze, the trees, rocks, soil everything overturned as if it had been plowed and beaten. Then the van would turn a curve and views open up of whole valleys, every tree gone, in recent clearcuts the colour a reddish brown which fades into grey. Looking around the hills are 'mohawked' with only patches of forest left standing, small fragments amongst the landslides and burn piles .The pure scale of the destruction would keep my attention fixed outside, only when I become tired and closed my eyes against the rumble of rocks on tires would I feel the jarring of the road.

On this night the clearcuts were thankfully hidden as we drove in the dark and my thoughts were occupied by what unknowns lay ahead of me. Earlier I had been shaken awoke at my campsite. What I had volunteered and spent an afternoon training for was turning into practice, I was going to be a tree sitter. To place myself up high in the forest canopy to block the road builders and the loggers and to activly become a defender of the forest. As I had blearily stuffed my sleeping bag in to my pack, shivering from nerves and the chill of the early morning, my friends still asleep around me.

The darkness around the car became slightly brighter and we slowed as the headlights picked out a large steel gate blocking the road. There was movement and a figure dressed thickly in rain gear shone a flash light towards us, a logging company security guard whose lonely job out here was to guard this gate and the machinery behind it. Beyond him maybe four hundred feet away the road abruptly stopped and the wild unlogged forest began.

At the sight of the gate we are already low in the passenger seats out of view, our driver kept the lights on high and as the guard came forward having to shield his eyes from the glare, we opened the door and crouching low closed it behind us and crept into the large ditch a few feet away. Once there we could hear the guard and our driver talking and we carefully started working our way along the ditch past the car, then the gate and further along we got back up onto the road. We walked as fast as we could towards the forest, to my relief there was no shout or challenge from behind. My backpack swung uncomfortably as I struggled with the weight of a weeks worth of food my friend leading the way carried my climbing gear.

With just the light of our headlamps the dark front of the forest loomed up and one second we were in the open scrapyard of the clearcut and next we stepped into the peace of the forest, hanging mosses brushed my face and the soft soil cushioned our footsteps.

Our guide here was the fluorescent surveyors tape which marked out the path for the logging road. This was handy as you can easily get lost bushwhacking and at night it becomes ridiculously easy to get disorientated. After what seemed to me quite awhile we stopped in the darkness and shining our flashlights up into the branches between three large trees we could see way up there the straight lines of the ropes and caught in the middle was the dark rectangle of the platform.

Protesters had been using tree sitting in the Walbran for about 2 months. The logging corporations with the law behind them had trashed legal protests and blockades of roads. So climbing and sitting in trees prevented them from being cut and stopped or delayed the building of roads. At first the platform was attached directly to the tree but after loggers started climbing up and being verbally and physically abusive. The tactic was changed to where a platform was suspended between various trees, protecting the sitter a bit and it also increased the area that couldn't be cut. From these and other efforts Fletcher Challenge and Macmillan Bloedel was running four weeks behind.
Standing at the base of the tree it all felt so hurried as I fumbled to put on my climbing harness, we were still vulnerable, and needed to be off the ground quick. A small line was tied to the back of my harness and I started climbing, after a jump to start there were evenly spaced branches all the way. With just the light from my head lamp giving me a radius within a foot of my face I wasn't slowed by any awareness of the height I was gaining. When I got to the ropes that were tied off to the tree I clipped the carabiner on my harness on to one of them locked it and pushed out along a branch and walked off the end. I didn't feel the height again in the darkness I could have been five feet off the ground instead of eighty or more.
The ropes sagged as my full weight left the tree and I slid downward to the mid-point of the rope and then had to pull hand over hand uphill to get to the platform. The closer I got the steeper the gradient on the rope, to a point that I started to struggle, my arms burned tension gripped my shoulders my legs kicked in the air. My body started to doubt what it had been talked into, I could feel the word 'can't' float into my mind, I was gonna say it. I lunged and grasped at the platform, grabbing something solid which I pulled myself towards and climbed on.
Posted by Welcome to the Walbran valley reunion blog at 10:24 PM 4 comments: